The Dunkin’ Joy in Childhood Foundation, as part of its national coffee day and “July of Joy” summer grant initiatives, announced Tuesday that $41,000 is being awarded to three Capital Region non-profits. They include the Bernard and Millie Duker Children’s Hospital at Albany Med, the Community Foundation for the Greater Capital Region, in Ballston Spa, and the Franklin Community Center in Saratoga Springs. 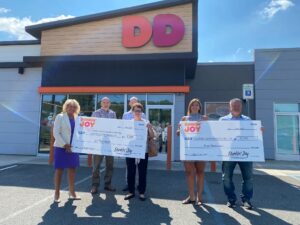 This Tuesday, Dunkin’ announced they have awarded grants of $6,000 to the Community Foundation for the Greater Capital Region and $5,000 to the Franklin Community Center in support of its food pantry program. This is all part of the Foundation’s celebration of its “July of Joy” summer grant cycle, which includes $894,000 in grants to 86 health and hunger relief-based non-profits nationwide.